The History of Edge Hill Academy 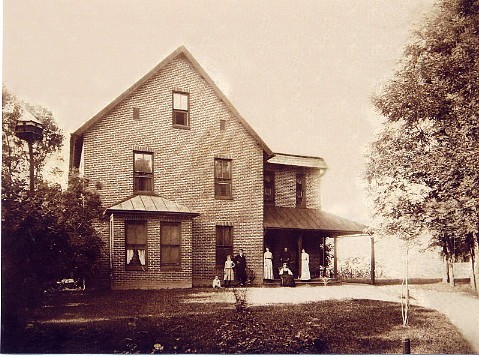 ​The house located at 356 East King Street in Littlestown, PA was originally known as the Edge Hill Academy or Edge Hill Institute. This private preparatory school was built in 1880 by Dr. Walter E Krebs and was open for about ​15 years from 1885 to 1900. In 1885, Littlestown schools did not go beyond the 8th grade and Dr. Krebs saw an opportunity to provide a service for higher education. Supposedly there was a house for the out of town students to board across the street at 351 East King Street.

Mr. Krebs had the house built to face the four winds so it sits kitty-cornered to East King Street. The original home was a two story brick house with a full attic, basement ​and nine bedrooms. There once was a tennis court on the east side of the house. Today, the home features 4,500 finished square feet of living space with six bedrooms and two and a half baths on three lots totaling 1.45 acres in Historic Littlestown.

Mr. Krebs' wife, Isabella, planted locust trees around the property. Two of the original trees still stand in the front yard. The Krebs' son, Stanley, was married to Marjorie Main who portrayed Ma Kettle in the Ma and Pa Kettle movies.

When the school closed around 1900, Mr Krebs, whose wife had died in 1895, shared the house with his niece, her husband Mr. LeFevre and their 13 children. When Mr. Krebs died in 1920, he left the house to the 13 LeFevre children. Around 1950, Benjamin LeFevre, the youngest child, bought the home from his brothers and sisters to become the sole owner.

Benjamin's wife, Anna Ulrich LeFevre, lived in the home until her death in June 1980. After ​Anna's death, her son Feree LeFevre, sold the house to Willis and Virginia Myers in November 1980 ending the Krebs/LeFevre family's ownership of the property ​that lasted for one hundred years.

​Willis and Virginia Myers lived in the home until November 2015 when they sold the home to ​Robert and Sheri Bachmann. The Bachmanns' ​restored and refurbished many parts of  the home, embracing the old but updating it for luxury and comfort..

The Bachmanns' lived in the home until August 2018 when John and Carolyn Yodonise purchased the property. In 2019, they added a 1,200 square foot building built by Morton Buildings to the property to house the Academy Retreat Center where quilters, scrapbookers, and other crafts people can meet to practice their craft.

The property has a long history​ and has been the subject of many articles. Below are some links to more information about the ​Institute/Academy and the people involved in it.